The Brain That Changes Itself: Stories of Personal Triumph from the Frontiers of Brain Science (Paperback) 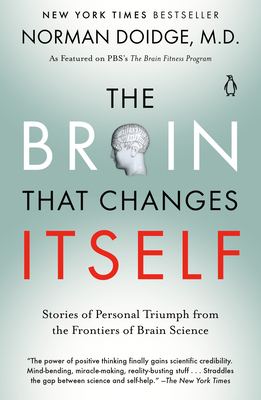 “Fascinating. Doidge’s book is a remarkable and hopeful portrait of the endless adaptability of the human brain.”—Oliver Sacks, MD, author of The Man Who Mistook His Wife for a Hat

What is neuroplasticity? Is it possible to change your brain? Norman Doidge’s inspiring guide to the new brain science explains all of this and more

An astonishing new science called neuroplasticity is overthrowing the centuries-old notion that the human brain is immutable, and proving that it is, in fact, possible to change your brain. Psychoanalyst, Norman Doidge, M.D., traveled the country to meet both the brilliant scientists championing neuroplasticity, its healing powers, and the people whose lives they’ve transformed—people whose mental limitations, brain damage or brain trauma were seen as unalterable. We see a woman born with half a brain that rewired itself to work as a whole, blind people who learn to see, learning disorders cured, IQs raised, aging brains rejuvenated, stroke patients learning to speak, children with cerebral palsy learning to move with more grace, depression and anxiety disorders successfully treated, and lifelong character traits changed. Using these marvelous stories to probe mysteries of the body, emotion, love, sex, culture, and education, Dr. Doidge has written an immensely moving, inspiring book that will permanently alter the way we look at our brains, human nature, and human potential.

Norman Doidge, M.D., is a psychiatrist, a psychoanalyst, and the New York Times bestselling author of The Brain's Way of Healing, which was the winner of the 2015 Gold Nautilus Book Award in Science & Cosmology. He was on the Research Faculty of the Center for Psychoanalytic Training and Research at Columbia University’s Department of Psychiatry in New York City, and on the faculty of the University of Toronto’s Department of Psychiatry for thirty years. He lives in Toronto.

“Brilliant...Doidge has identified a tidal shift in basic science...The implications are monumental.”
—The London Times

“Fascinating. Doidge’s book is a remarkable and hopeful portrait of the endless adaptability of the human brain.”
—Oliver Sacks, MD

“Lucid and absolutely fascinating. It satisfies in equal measure the mind and heart.”
—The Chicago Tribune

"An utterly wonderful book—without question one of the most important books about the brain you will ever read; yet it is beautifully written, immensely approachable, and full of humanity. Its message is one of hope: it is not just our brains that shape our thinking, but our thinking that, very definitely, shapes our brains."
—Iain McGilchrist MA (Oxon), BM, FRCPsych, FRSA author of The Master and His Emissary: The Divided Brain and the Making of the Western World

“Two years ago, when the journal Cerebrum at the Dana Foundation in the US updated its list of great books about the brain for the general reader, it found there were already 30,000 brain-related books in English. Aided by scientific advisers and readers, it produced a new list - with The Brain That Changes Itself at No. 1.”
—The Melbourne Age

“Doidge turns everything we thought we knew about the brain upside down.”
—Publisher’s Weekly

“Brilliant...This book is a wonderful and engaging way or re-imagining what kind of creatures we are.”
—Jeanette Winterson, novelist, Order of the British Empire, Guardian, Best Book of 2008

“Superb. Brilliant. I devoured it.”
—V.S. Ramachandran, MD, PHD, Director of the Center for Brain and Cognition, Univeristy of California, San Diego, Author of Phantoms of the Brain

“Doidge... is a master ... at explaining science to the rest of us. Doidge is the best possible guide. You don’t have to be a brain surgeon to read it, just curious about your brain.  Buy this book. Your brain will thank you.”
—The Globe and Mail

“Readers will want to read entire sections aloud and pass the book on to someone who can benefit from it. [Doidge] links scientific experimentation with personal triumph in a way that inspires awe”
—Washington Post

“Doidge tells one spell-binding story after another as he travels the globe interviewing the scientists and their subjects who are on the cutting edge of a new age. It may be hard to imagine that a book so rich in science can also be a page-turner, but this one is hard to set down.”
—Jeff Zimman, Posit Science, e-newsletter

“The most readable and best general treatment of this subject to date.”
—Michael M. Merzenich, Ph.D., Keck Center for Integrative Neurosciences   University of California at San Francisco

“A riveting, essential book… These stories are most emotionally satisfying. Doidge addresses how cultural influences literally "shape" our brain. [And]….our response to the world around us is not only a social or psychological phenomenon, but often a lasting neurological process.”
—Montreal Gazette, Liam Durcan, MD,      Neurologist & Novelist

“A hymn to life.”
—Panorama Italy

“This books is like discovering that the earth isn’t flat.”
—Gretel Killeen, Sun Herald, “The Books That Changed Me”

“A masterfully guided tour through the burgeoning field of neuroplasticity research.”
—Discover Magazine

“Norman Doidge has shown that what and how we think can change our brains. He has illuminated the foundations of psychological healing.”
—Charles Hanly, Ph.D.President, International Psychoanalytical Association

“Astonishing. This book will inevitably draw comparisons to the work of Oliver Sacks. Doidge has a prodigious gift for rendering the highly technical highly readable. It's hard to imagine a more exciting topic--or a better introduction to it.”
—Kitchener Waterloo Record

“Beautifully written and brings life and clarity to a variety of neuropsychiatric problems that affect children and adults... It reads a bit like a science detective story and -you do not need a Ph.D. to benefit from the wisdom imparted here.”
—Barbara Milrod, M.D. Psychiatry, Weill Medical College, Cornell University, New York

“An eloquently written book about the boundless potential of the human brain.
—The Jewish Week

“You really should read this book... this remarkable work will lead us to see ourselves in a new light.”
—Mail on Sunday, England

“An 'essential primer’ for anyone who wants to better understand their own brains and the considerable advances in neuroscience of the past two decades.”
—Melbourne Age

“A book that everybody should read... it is nothing short of miraculous. Get it!”
—Yoko Ono, Yoko Reads Book Recommendations

“Fascinating … Doidge has accomplished a rare feat. He has written a book that accurately conveys cutting-edge scientific discoveries while simultaneously engaging both scientific and popular audiences.”
—Neuro-Psychoanalysis

“A remarkable book ... a highly readable exploration of a branch of science that has the potential to change all our lives.”
—Hobart Mercury

“Why isn't this book on the top of the bestseller list of all time? The recognition that the brain in plastic and can actually change itself with exercise and understanding is a huge leap in the history or mankind, far greater than landing on the moon.”
—Jane S. Hall, International Psychoanalysis

“Only a few decades ago, scientists considered the brain to be fixed or ‘hardwired’ and considered most forms of brain damage, therefore, to be incurable.  Dr. Doidge, an eminent psychiatrist and researcher, was struck by how his patients’ own transformations belied this and set out to explore the new science of neuroplasticity by interviewing both scientific pioneers in neuroscience, and patients who have benefited from neurorehabilitation. Here he describes in fascinating personal narratives how the brain, far from being fixed, has remarkable powers of changing its own structure and compensating for even the most challenging neurological conditions. Doidge’s book is a remarkable and hopeful portrait of the endless adaptability of the human brain.”
—Oliver Sack, MD, author of The Man Who Mistook His Wife for a Hat