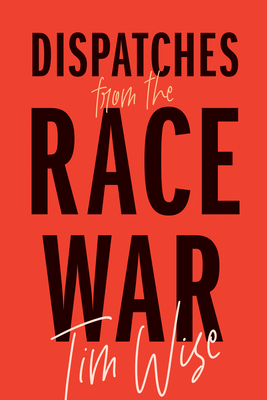 Essays on racial flashpoints, white denial, violence, and the manipulation of fear in America today.

Drawing on events from the killing of Trayvon Martin to the Black Lives Matter protests last summer, Wise calls to account his fellow white citizens and exhorts them to combat racist power structures.--The New York Times

"What Tim Wise has brilliantly done is to challenge white folks' truth to see that they have a responsibility to do more than sit back and watch, but to recognize their own role in co-creating a fair, inclusive, truly democratic society."--Michelle Alexander, author of The New Jim Crow

Tim Wise's new book gives us the tools we need to reach people whose understanding of our country is white instead of right. And without pissing them off --James W. Loewen, author, Lies My Teacher Told Me

Tim Wise's latest is more urgent than ever. --Heather Ann Thompson, Pulitzer Prize-winning author of Blood in the Water: The Attica Prison Uprising of 1971 and its Legacy

Dispatches from the Race War] is a bracing call to action in a moment of social unrest.--Publishers Weekly

Dispatches from the Race War exhorts white Americans to join the struggle for a fairer society.--Chapter 16

In this collection of essays, renowned social-justice advocate Tim Wise confronts racism in contemporary America. Seen through the lens of major flashpoints during the Obama and Trump years, Dispatches from the Race War faces the consequences of white supremacy in all its forms. This includes a discussion of the bigoted undertones of the Tea Party's backlash, the killing of Trayvon Martin, current day anti-immigrant hysteria, the rise of openly avowed white nationalism, the violent policing of African Americans, and more.

Wise devotes a substantial portion of the book to explore the racial ramifications of COVID-19, and the widespread protests which followed the police murder of George Floyd.

Concise, accessible chapters, most written in first-person, offer an excellent source for those engaged in the anti-racism struggle. Tim Wise's proactive approach asks white allies to contend with--and take responsibility for--their own role in perpetuating racism against Blacks and people of color.

Dispatches from the Race War reminds us that the story of our country is the history of racial conflict, and that our future may depend on how--or if--we can resolve it. "To accept racism is quintessentially American," writes Wise, "to rebel against it is human. Be human."

Tim Wise, whom scholar and philosopher Cornel West calls, A vanilla brother in the tradition of (abolitionist) John Brown, is among the nation's most prominent antiracist essayists and educators. He has spent the past 25 years speaking to audiences throughout North America, on over 1000 college and high school campuses, at hundreds of conferences, and to community groups across the nation about methods for dismantling racism.Wise's antiracism work traces back to his days as a college activist in the 1980s, fighting for divestment from (and economic sanctions against) apartheid South Africa. After graduation, he threw himself into social justice efforts full-time, as a Youth Coordinator and Associate Director of the Louisiana Coalition Against Racism and Nazism: the largest of the many groups organized in the early 1990s to defeat the political candidacies of white supremacist and former Ku Klux Klan leader David Duke. From there, he became a community organizer in New Orleans' public housing, and a policy analyst for a children's advocacy group focused on combatting poverty and economic inequity. He has served as an adjunct professor at the Smith College School of Social Work, in Northampton, MA., and from 1999-2003 was an advisor to the Fisk University Race Relations Institute in Nashville, TN. Wise is the author of seven previous books, including Dear White America: Letter to a New Minority, Under the Affluence: Shaming the Poor, Praising the Rich and Sacrificing the Future of America and has been featured in several documentaries, including The Great White Hoax: Donald Trump and the Politics of Race and Class in America, and White Like Me: Race, Racism and White Privilege in America. Wise is one of five persons--including President Barack Obama--interviewed for a video exhibition on race relations in America, featured at the National Museum of African American History and Culture in Washington DC.His media presence includes dozens of appearances on CNN, MSNBC and NPR, feature interviews on ABC's 20/20 and CBS's 48 Hours, as well as videos posted on YouTube, Facebook and other social media platforms that have received over 20 million views. His podcast, Speak Out with Tim Wise, features bi-weekly interviews with activists, scholars and artists about movement building and strategies for social change.